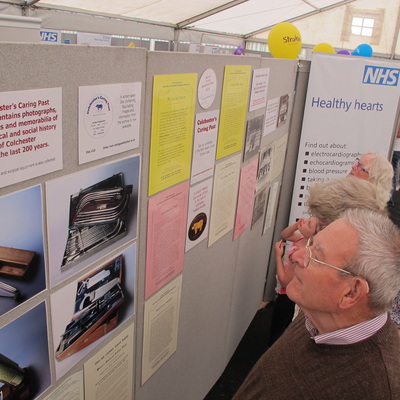 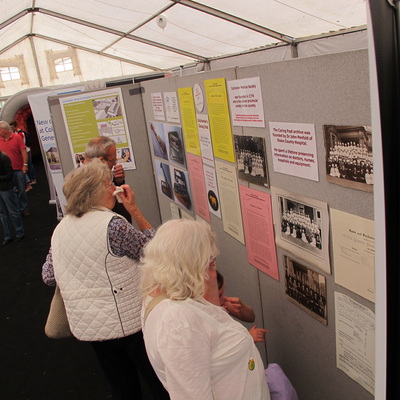 ﻿TENDING 100 SHOW      SATURDAY JULY 12 2014
We were very pleased to be invited to participate in the NHS marque
and our display included vintage instrument photographs, historical staff pictures
and six Past Caring Tales.WweewwWWW﻿
An informal evening at The Firstsite Gallery
Colchester CO1 1JH    Friday November 21st  2014

Colleagues met in a relaxed and informal setting with laughter, talk ...... and curry and.... magic!
There was a display of information about the medical society and the history of medicine in Colchester.


Dr Paul Marfleet comments on an unusual and enjoyable gathering

We may well be able to determine a diagnosis from a myriad of vague symptoms; we may be able to make a rash vanish with the appropriate cream and some of us might perform a rescue operation on a compromised abdomen. However, there was no way that even a couple of paracetamol could lower the temperature during a high energy performance by Michael J Fitch at the Medical Society Meeting on Friday 21st November at First Site.

Jonathan Evans-Jones had decided to change the format of this meeting to a less formal ‘curry with
entertainment’ and what an inspired idea it turned out to be.

59 members enjoyed the more relaxed pre-meal social get-together but once seated at tables, we were all spellbound by the astonishing and unfathomable tricks as Michael J Fitch toured the room.

Rings appeared and disappeared, cards altered their face value with a flick of his wrist and foam strawberries multiplied and vanished only to re-emerge as a mini jar of Wilkins jam!

The main show featured our own Sajit Rahman as an assistant to a rope trick. Anyone who had chosen to sit in the front row became a target (or victim?) for Michael J. and the ventriloquism that saddled poor Sajit with a silly little voice left many of us helpless with laughter and barely able to see through the tears streaming down our faces. Sajit took it all with good grace and found it as funny as the rest of us. Haven’t laughed so much for ages!

Speaker: Mr Steven Large   “A Career  through a lifetime in Hearts”

Mr  Large trained (with Jonathan Evans-Jones) in Guy’s Hospital in the early  1970’s. Initially in general surgery but later in Cardio-thoracic surgery achieving his consultancy in Papworth Hospital  where he still works.
He has (in his own words) vacillated between surgery, Research, Teaching and Management
in a long and prestigious career.
A light-hearted and fascinating talk on his experiences.

In the garden of the home of the President,The Old Rectory, Great Bentley 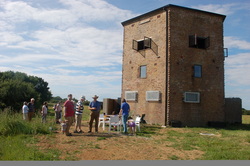 
The weather was  beautiful for this year’s farm walk
– sunny and warm but with a gentle sea  breeze.

About twenty members and children enjoyed the usual walk along the seawall with elevated views of the surrounding fields of cattle and sheep. Tea this year was in the newly refurbished Radar Tower. This  tower was built in late 1940 to house a shore based version of an RDF (Radio  Direction Finding - aka Radar).
11 towers were built and this is one of just two  known still to exist. The other is at Harwich.
The RDF scanner was housed inside the building on the top floor.   The operators worked on the floor below and the ground floor housed the  generator and 'living quarters'.

Chavasse VC House is the Garrison Personnel Recovery Centre part funded by Help for Heroes which opened in Colchester in 2012. It is a wonderful facility for helping injured servicemen and women in the final stages of recovery from their physical or mental trauma towards either reintegration to military life, or successful transfer to civilian life.
Steve Schollar, the Centre Manager, was  due to speak at the Medical Society  meeting in September 2013 but was unable to do so at the last minute on account of illness. He arranged this trip as an alternative.


“The first 15 minutes is critical on the battlefield” Steve Schollar General Manager of Chavasse VC House told a group of about 20 MedSoc members on Wednesday 2  April. “In Emergency Medicine  in the NHS you think that the first hour is critical, but on the  battlefield the Armed Forces think that the  first 15 minutes are critical”. Such is the scale of injuries  sustained by wounded personnel that the  aim is to start resuscitation within that time scale, if  possible. But this immediate intervention means  that more and more wounded are recovered from the battle zone  with the most horrific injuries -  multiple amputations, burns, blinding and hearing damage.

Brought back to this country they will first be intensively  treated at Headley Court and put well on the  path to recovery and a return to civilian life. Chavasse VC  House is a step further down that road to recovery and a return to some sort of normality. !  Chavasse VC House, Colchester, is named for Noel Chavasse, an  army doctor who won two VCs during the First World War for his bravery in recovering wounded  soldiers under enemy fire despite being badly wounded himself; sadly he died of his wounds within  a few days. It is part of a network of  5 Support and Recovery Centres which were set up by the armed  services some 7 years ago to provide lifelong support for Service men and women, who have sustained life-changing injuries, and their families. !

The wounded and injured from the recent conflicts in Iraq and  Afghanistan but also from older  conflicts - Bosnia, Falklands - can access these superb  facilities. Although ‘State of the Art’ describes  the facilities, as Steve says, “It’s all about the blokes”, and he leads a team of cheerful and  enthusiastic professionals who together can provide  psychological, emotional, financial and employment advice and support under one roof. This is not a  hotel for life, but a step on the way to returning to life outside or even sometimes back to duty, and their  achievements are amazing. !

The hierarchy of service life is put aside when they enter  Chavasse VC House, there is no Officer/ Other Ranks divide, and they all wear civilian clothes. The  injured become part of a ‘Band of Brothers’  while their families, partners, and carers (male and female)
become part of the ‘Band of Sisters’ which aims to provide psychological and practical support for the huge  emotional demands that these injuries place on their nearest and dearest. !

Although the physical injuries are what we usually have in mind,  Steve Schollar reminded us of the “hidden wounds” suffered by many. For every death in Iraq and  Afghanistan, there will be 8 severe and life-changing injuries, for each of those eight there will  be another 10 less severely wounded, and  for each of that 10 there will be another 10 with psychological damage from their battle experiences.
Chavasse VC House will also help this group deal with their  problems with the aim of helping them to  live on their own. !

It was an interesting and thought-provoking evening, not a fun  experience, but it is quite incredible  what can be achieved with belief and encouragement - a double  amputee rock-climbing? The NHS  could do with some of this attitude. !

For a flavour of what Chavasse VC House can achieve, have a look  at their website at http://www.helpforheroes.org.uk/how-we-help/recovery-centres/colchester-essex


Dr Woodings trained in Cambridge and The  Middlesex Hospital, initially in Haematology. His interest in drug development  led him to became a medical advisor to a number of Pharmaceutical  companies including Glaxo, Roussel and   Schwarz.

This work allowed him contact  with Drug Regulatory Authorities and he later joined the MHRA
(then the MCA) initially as a consultant, then as a senior civil servant until  his retirement in 2007.


He describe his tripartite career including many  amusing (he hopes) anecdotes  and discussED drug development, licensing, and  development expressing  opinions, probably contentious, about improving or  changing the system.

The Texas  syndrome - what women hide