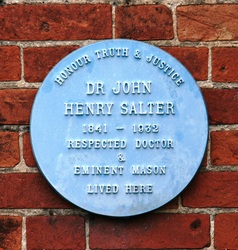 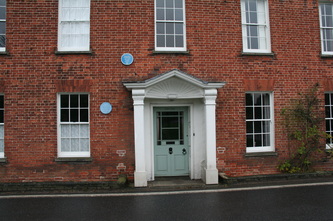 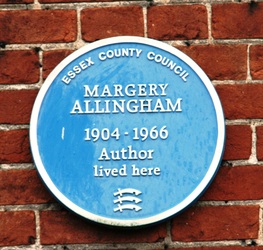 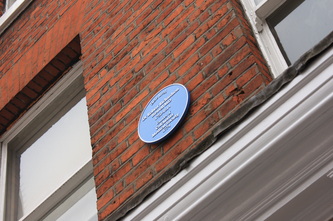 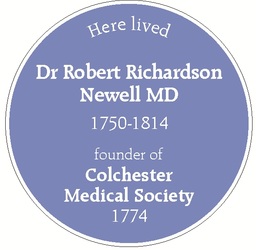 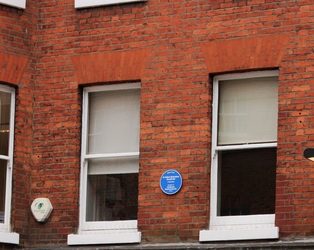 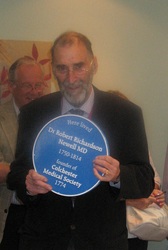 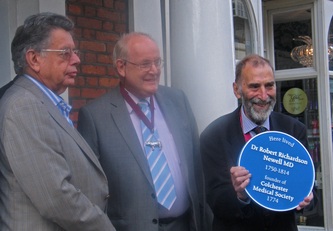 Colchester  Medical Society are to place a plaque to the  Society's founder, the young  surgeon and apothecary, Robert Richardson Newell, outside his  former home, 39 Head Street - now Ellison Solicitors  - a fine porticoed property  left of the Odeon  Cinema.

The  plaque will be unveiled on August 31st by Alderman Dr  Chris Hall, ex mayor and retired GP, at a  gathering at Ellisons - main  reception entrance a few doors left of  No  39.

Colchester Medical Society facilitates  professional and  social interaction between doctors in the North East Essex  area and senior  members will be present at the reception. Dr Adrian  Beckingsale, current  President of the society, comments "Modern medicine owes  much to the heritage  and work of great men and women who served our community  in earlier centuries.  We are proud to remember the contribution made by Dr  Newell and to publicly mark  his home in the heart of Colchester. Recognition of  his initiative, still strong  after nearly 250 years, is long overdue".

The  plaque will be prominently affixed on the  Head Street premises in the days following the unveiling. 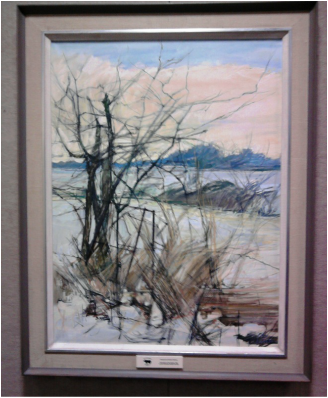 2012 July
Following recent redecoration of Outpatients we were able to rehome a painting the Medical Society donated when the General opened. This is now in an excellent position in  the Lecture Hall at the Post Graduate Centre and we have added a plaque featuring the MS logo.

Colchester Evening Gazette 26.6.12
The Colchester’s Caring Past exhibition at the Primary Care Centre has been enlarged with displays of the Society’s artefacts in windows by the main entrance.

We shortly plan further to enhance the exhibition with photographs of vintage equipment taken by Colchester’s Sixth Form College  students.

Early Minute Books of the Society are being  transcribed by Jane Pierson, Lecturer at Essex  University.

The four etched glass panels which were in the  children's ward at ECH are to be placed, thanks to Simon Blaxill, in the new  Children's unit at CHUFT.

It is hoped to organise a display/talk /lunch at Essex University featuring some of the Society's medical book collection .

Thanks to John Grice, Honorary Member, our two free  websites are flourishing. 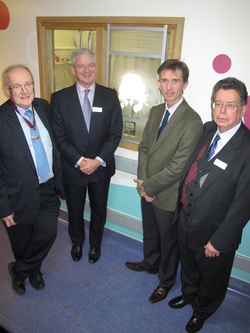 At  a ceremony hosted by Dr Gordon Coutts, CHUFT Chief Executive, and Mr Adrian Beckingsale, CMS President, four etched glass panels which had originally been in Children’s
Ward 5b at Essex County Hospital, were unveiled in the new CGH  Children’s Unit.

Present  were representatives of the Blaxill family
- of Kent Blaxill who donated their instalment. The Alport
and Gott families (present at the unveiling in Ward 5 in 1957), CHUFT Management, Medical and Nursing Staff, Colchester
Civic Society and  Colchester Museum Society. 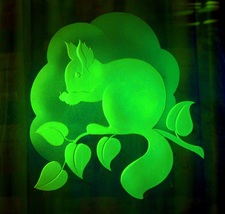 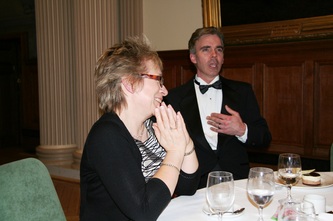 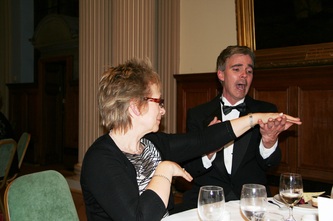 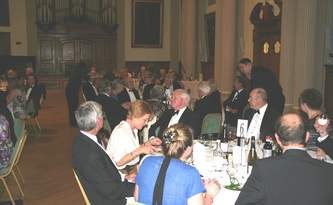 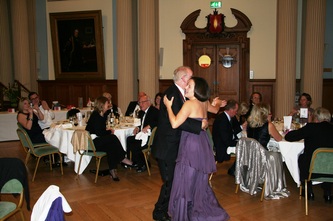 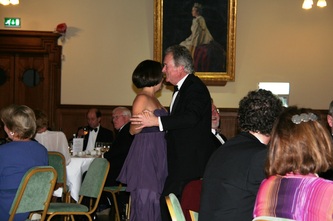 Miss Russell-Eggitt is a renowned Paediatric Ophthalmologist, trained at Addenbrooke’s, Leicester and Moorfields Eye Hospital. She   is currently  Consultant Paediatric Ophthalmologist at Great Ormond Street, at The Portland  Hospital for Women and Children,and Honary Consultant at Moorfields Eye  Hospital. She has written and lectured extensively with many publications and
book contributions to her name. She is a past President of the Section of  Ophthalmology of the Royal Society of Medicine.More importantly she is a  superb clinician and has for 20 years been an invaluable source of advice and  provided an invaluable tertiary referral service for the more complex Paediatric Ophthalmology patients of Colchester and North East Essex.

Miss Russell-Eggitt gave an amusing and  thought-provoking analysis of the works of various painters whose peculiarities of style could have resulted from ophthalmological conditions such as  astigmatism (El Greco – probably not), Cataract (Monet and Turner) and  dichromatic colour vision. The latter seems reasonably well proven for John  Dalton and his brother, but dubious for Constable.

Vitreous detachment and  haemorrhage seems explain the visual distortion described by Eduard Munch and  also Joshua Reynolds – advised at the time to rest his eyes and “stop painting  women” – advice he appears to have failed to heed as he had a contra lateral  vitreous haemorrhage a few months later.  Among the many beautiful illustrations was one of the President dressed
up to carve the Ward turkey.

The vote of thanks was given by Mr J  Evans Jones who recalled seeing the egg timer in theatre used by his father to
ensure adequate scrub up time prior to cataract surgery – performed without  gloves.

Miss Russell-Eggitt was presented with  the society’s goblet.

Every year in July hundreds of exhibitors fill an enormous exhibition site in the  Grounds of Hampton Court Palace. Not only plants are displayed and sold by specialist growers but all manner of enhancements for the garden. Travelling by  coach with refreshments served en route by the Beckingsales meant no parking  problem and no journey across London on the tube. Lunch was also laid on for us - a great opportunity to meet up and tell one another what we had seen and what  everyone must see, including the extraordinary replica of an underwater coral reef made of sedums and cacti.  We  saw community gardens complete with washing lines, met bee enthusiasts, saw novel ways of deterring slugs and a lavender grower who had created an Olympic  race track from seven different colours of lavender.  It  was lovely to find favourite plants displayed with their less familiar relatives  and equally good to meet old friends and new members of the society. This was an  excellent day out, meticulously planned, and at the all-inclusive price of £75. 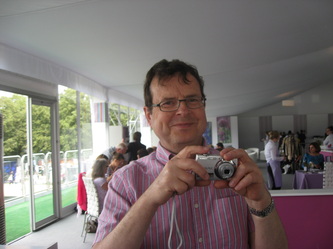 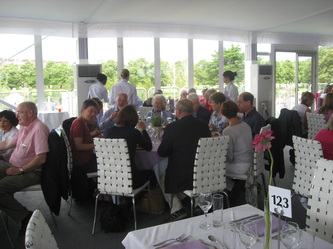 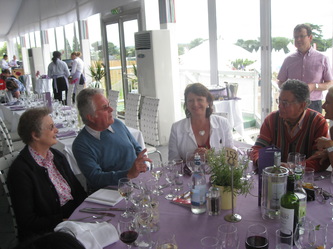 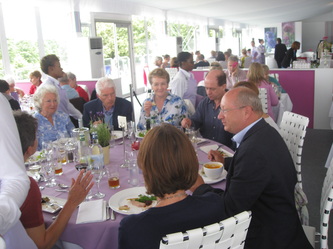 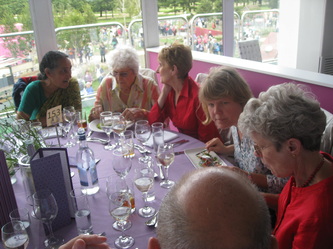 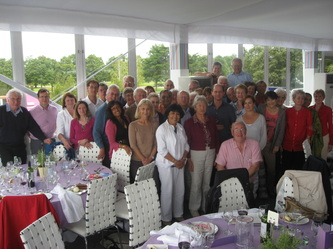 FARM WALK   Sunday 24th June
Mell Farm,  Tollesbury
Adults and children enjoyed a walk down to the sea wall and back  to the  barn for tea.

The second annual Colchester Medical Society Farm Walk . In the morning there was the most tremendous downpour which  discouraged some attendees from coming, but those who were brave enough to attend were rewarded by a dry afternoon (although underfoot Gumboots were  definitely the order of the day). Beautiful views and lots of wild life and  cattle around made for a most enjoyable walk out along the sea wall and for some  a lift back in the landrovers by our hosts Vivien and Andrew St Joseph. The  afternoon was rounded off by a splendid tea in the old Essex barn with wonderful  home-made cakes and other goodies.  Next year it would be great to welcome more children to the event  as once  again it was a most enjoyable  afternoon. 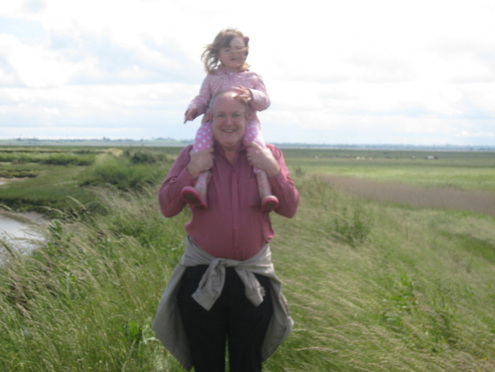 A very Presidential grandaughter
CRICKET MATCH    30th June    Myland Cricket Ground         Hospital doctors v GP's
On a surprisingly sunny day we met at  the Mile End Recreation Ground to contest the re-inaugurated Colchester Medical  Society consultants versus GPs cricket match. At stake was an impressive trophy  and of course personal and collective glory. It appeared that different  participants had been given different starting instructions but eventually  enough players were present to make a start; 11 consultants against 9 GPs, a  very late consultant and a ringer.  After all players had tried to remember  whatever skills they may have had in the past during a high level warm up the  toss took place and the GPs were invited to bat. The match format was 35 overs  a side with batsmen retiring if they managed to score 25 runs. The GP innings  featured useful contributions from Drs Aurora, Pickering and Rudge, wagon  wheels of each innings making interesting viewing. Most of the consultants had  a bowl, the pick being Dr Sivakumar, doing a passable impersonation of  Muralitharan, and Dr Ramali who wrapped the tail and re-introduced retirees pretty rapidly. In the field Mr Stanton put his new cricket shirt to the test  by diving around like Derek Randall after an espresso. The GPs left the  consultants 119 to win and realising that this was possibly not a big enough  total put all their eggs into the opening bowling with Dr Kuppaswamy. Drs  Robinson and Aftab set off in physicianly pursuit, not doing a lot but  accumulating 25 runs each. Drs Watling and Ramali then swiftly followed on and got sufficiently close to the required total that on their departure the  consultants were unable to snatch defeat from the jaws of victory, despite  trying quite hard. By this time the crowd had been swelled by the arrival of  the dignitaries who presented the trophy to the winning captain. All that  remained was for the contestants to repair to the pavilion to replace all the  calories consumed on the pitch through a splendid tea obtained from a willing  provider in Hadleigh. All agreed that it had been a great way to spend the  afternoon and a re-match was proposed for later in the season. 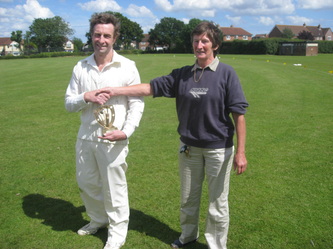 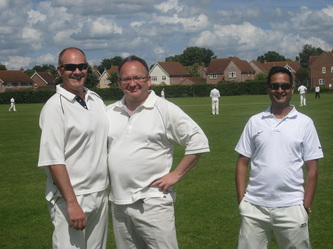 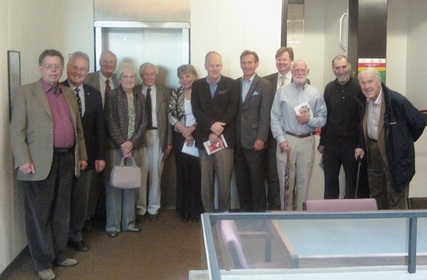