The Colchester Medical Society was almost 50 years old when Essex County Hospital was opened in 1820.
The hospital still serves the town.

The  Colchester Medical Society was founded by Robert Richardson Newell (1750-1814) a surgeon and apothecary practicing in the town. The earliest minute books have  been lost but the date is confirmed by Dr Newell’s obituary notice in the local  press and by Medical Register of 1779. He was the Society’s first secretary and  treasurer and remained so for the rest of his life. He was the son of Robert  Newell (1705-1766), a surgeon and apothecary practising in Harwich and of  Susannah, daughter of John Richardson an apothecary in Colchester. His mother died in 1764 and two years later his father as well. He was adopted by his  grandfather Richardson and may have acted as his apprentice in his shop at  Pelham’s Lane in Colchester and when he died in 1768 his grandson inherited his  estate.  It is not known whether Newell had further medical training or where.  In 1773 he married Sally Hasell of Hadleigh, Suffolk by whom he had six boys and  six girls. In 1780 they moved to a larger house in Head St which was  subsequently demolished to form part of what became the Post Office in 1930. It  says much of Newell’s tact, diplomacy and enthusiasm that at the age of twenty four he was able to persuade his medical colleagues, all older than himself,  to  found the Colchester Medical Society. He was instrumental in calling a meeting  in Chelmsford on 30th October 1786 which resulted in the foundation of the Essex  and Hertfordshire Medical Benevolent Society “for the relief of distressed  medical men, their wives, children and orphans”. Its first president was Dr  Thomas Dimsdale (1720-1800) who had been given the title of baron and a pension  by Empress Catherine II of Russia for his inoculating her and her court against  smallpox in 1768. In 1813 Dr Newell was presented with a silver cup by his  Colchester colleagues in recognition of his services to the medical profession.  This was subsequently donated to the Colchester Corporation by his grandson  Major F H Newell and now forms part of the town’s plate as the Newell Cup but  his silhouette portrait has been lost.  Also lost is a blue plaque in his memory  unveiled by the then mayor in 1921 at the instigation of Dr Philip Laver, which  was to have been placed at the site of his Head St residence but this never occurred.
The other six Founder Members of the Society were:

·         Colin Hossack (d 1782) he graduated M.D. at Edinburgh and had been personal physician to Fredrick, Prince of Wales, the father of George III. When the Prince died in 1751 Dr Hossack left London, to practice in Colchester and became Mayor of Sudbury.

·         Jordan Harris Lisle (d 1788) was a descendant of Sir George Lisle one of the garrison commanders   shot after the end of the Colchester siege in 1648. He practiced as an apothecary in Colchester and became its mayor in1769.

·         Cater Day (d 1799) he had been apprenticed to Robert Courthope Sims of Dunmow in 1754 for the sum of £105. He was a leading member of the Quaker community, a keen sportsman, and an enthusiastic inoculator against smallpox. In 1782 he was adjudged bankrupt and his house put up for sale to pay his debts. In 1799 he died when he “....accidentally fell into the river at Hythe bridge and drowned.”

·         Robert Sterling (1724-1787) he practiced as a surgeon and man-midwife from the High St. He was elected a Fellow of the Royal Society for his knowledge of mathematics, at the recommendation of Charles Gray, then MP for Colchester.

·         Joseph Stapleton (1740-1797) graduated M.D. from Edinburgh in 1767, and practiced as a surgeon and apothecary in Colchester. He was a leading non-conformist and was buried in Lion Walk. When he became too ill to work prior to his death, he engaged a Dr Samuel Philbrick as his assistant, who joined the Society in 1798 and his son Samuel Adolphus Philbrick who became its president in 1856.

The society soon attracted members from outside the town, John Rogers of Manningtree and John Fairclough of Nayland joined in 1775 followed by many others. The most distinguished new member was Dr John Coakley Lettsom (1744-1815) who was elected in May 1786. He was the founder of the London Medical Society in 1773 which may have been the model for Newell’s Colchester society. He was a leading Quaker,  a supporter of prison reform and enthusiastic advocate of vaccination rather than inoculation which he introduced to the United States.

In 1776 Newell applied for the Colchester Medical Society to join the newly formed Humane Society for the Recovery of the Apparently Drowned and raised twenty guineas towards it. A “resuscitation apparatus” was dispatched and soon put to good use when Newell’s maidservant fell down a well. Assisted by fellow members Cater Day and Robert Sterling, this “fumigator” (a pair of bellows and tube with which to blow tobacco smoke into the rectum) proved successful but the next day she complained of great weight and fullness in the intestines, relieved by a gentle purge.
One of the earliest recipients of the Humane Society medal was Dr William Fairclough of Nayland for his resuscitation of the fifteen month old child of James and Elizabeth Bacon on 24 March 1777. In 1820 the Colchester and Essex Charitable Hospital opened and honorary surgeons and physicians were appointed from the local doctors. Thomas Cromwell’s History of Colchester published in 1825 states: ”the Medical Society holds four meetings a year at which patients are presented for discussion. The subscription is one guinea to join and half guinea per annum, a proportion of the funds is appropriated to the purchase of books which circulate through the membership which is circa 30 to 40 doctors". The earliest existing minute book of the Society covers the years 1833 to 1856. It is a small octavo booklet mainly recording dates of meetings with members present, election of officers and books purchased for the library. Occasionally special meeting were called to discuss matters of professional behaviour and these were recorded at length. In 1852 it passed a resolution that no member shall practice homeopathy but after the formation of the General Medical Council in 1858 this side of the Society’s activity came to an end. Sometime in the mid nineteenth century it became a custom for members attending meetings to dine together afterwards, with the president calling for the bill at nine o’clock. The meetings then became social gatherings as well as educational.

The formation of a library was an early object of the Society. It started as a circulating book club, for some years situated in a room above a bookseller on the High St. In 1843 a more permanent collection was started by subscribing to the Sydenham Society for its reprints of medical classics. In 1855 the library committee was started, with an Honorary Librarian, whose title was changed in 1907 to “Librarian and Keeper of the Archives”. The library expanded with donations of books and the important library of Dr Cowerdine of Earls Colne. Originally kept in the Doctors’ room at the Essex County Hospital, it was later proudly displayed in the Post Graduate Centre built at the rear with money raised by members of the society and others. Space again became a problem when the Post Graduate facilities had to follow the hospital to its new location on Turner Rd in 1986. The problem was resolved by the Colchester Medical Society placing its collection of circa 500 books on permanent loan to the Essex University Library where it is archived for research purposes. 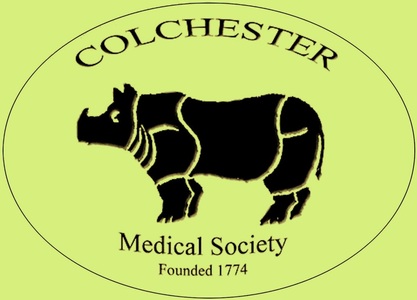